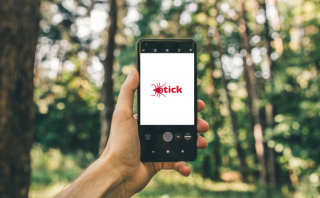 As the days are getting longer and warmer, and as many provinces and territories across Canada are starting to ease COVID-19 lockdown restrictions, many Canadians are expected to go enjoy our beautiful outdoors while maintaining social distancing. Unfortunately, ticks do not obey social distancing measures and some species are of public-health concerns, hence the development of the eTick.ca platform described in our last blog article. After successfully extending its services from Quebec to New Brunswick and Ontario in 2019, the eTick project launched a mobile app this spring and received more funding from the Public Health Agency of Canada to expand the project to the rest of Canada by spring 2021. The first phase of this expansion consisted in extending our service to Saskatchewan, Nova Scotia, and Newfoundland and Labrador in April 2020.

Summary of the 2019 season in New Brunswick, Ontario, and Quebec

More than 1300 ticks were identified through eTick in 2019 and displayed on our public interactive map. The most commonly identified species in each province was Ixodes scapularis, the blacklegged tick responsible for the transmission of the bacteria that causes Lyme disease. Another trend is a westward increase in the proportion of Dermacentor spp. (i.e. American dog tick or moose tick) submissions and an eastward increase in the proportion of Ixodes cookei (groundhog tick) submissions. More than half of the specimens were found on animals, especially dogs. For human hosts, ticks were most often reported from young children (i.e. 0-10 years old) and adults aged 31 to 70 years old. After correcting for the population size of each age category in Canada the human age groups most commonly bitten in the 3 covered provinces were 31-40 and 41-50 (21% of corrected submissions each), 0-10 (18% of corrected submissions), and 51-60 (17% of corrected submissions).

At the beginning of the 2020 tick season, the eTick app was launched on both the App Store and Google Play. The main goal of the app is to allow users to rapidly submit a tick they just found when practising outdoor activities. The use of GPS features facilitates and improves the accuracy of the information regarding the localisation where the tick has been found. Using the app, users performing outdoor activities can also now more easily navigate the map from their mobile devices to see if ticks have been found in their area. Finally, most features present on eTick.ca are also available on the eTick app.

Large number of submissions so far in 2020

May is one of the busiest months in terms of tick activity. As of May 1st, eTick had already identified 300 ticks found in 2020 and made those records accessible to the public. By May 15th, 2020, this number almost quadrupled. These numbers are mostly explained by many submissions coming from Saskatchewan and Ontario. In comparison with 2019, other than higher numbers of tick submissions per capita, we also observe a higher diversity of ticks early-on in the season, with for instance several submissions of Ixodes marxi (squirrel tick) and Ixodes cookei (groundhog tick). The former is rarely encountered on humans and pets, whereas the other is more commonly found during the months of June and July.

How can Canadians stay tick-safe during the 2020 tick season?

The best way to stay tick-safe is to avoid being bitten by ticks. By following the recommendations of the Public Health Agency of Canada, Canadians can prevent tick bites. The main recommendations are to wear long clothing, apply tick repellents, and perform tick checks after spending time outdoors. Using the eTick platforms where available, the public can avoid areas where ticks have been found, especially in habitats with knee-high vegetation. If a tick is found on a person or pet, it should be removed immediately using tweezers if the tick is embedded into the skin. The next step for residents of provinces covered by eTick is to submit pictures of the tick using the eTick app or eTick.ca and follow our photographic guide or watch our short video tutorial. This step has now been made easier with the eTick app in case a tick was to be found while outdoors. Within one business day, the user will receive a message with information regarding the tick they found, including details about potential pathogens transmissible to humans and pets, if any. The contribution of Canadians to the eTick project will help other members of the community identify areas where ticks have been found. Public health authorities might also use this data for specific surveillance activities and to detect the presence of new tick species or establishment of new populations across the country.

Pierre Chuard obtained his PhD in behavioural ecology at Concordia University, Montreal, in 2017. He currently works as a research associate in the laboratory of Prof. Jade Savage at Bishop's University. He is the project coordinator of eTick.ca, a web platform identifying ticks using pictures submitted by the public to better monitor tick populations in Canada. In collaboration with public health officials, they aim at improving prevention and awareness to vector-borne pathogen exposure. Pierre is also a contract faculty at the same university where he has been teaching Advanced Ecology.

Jade Savage completed her PhD in entomology at McGill in 2004. She is currently a full professor at Bishop’s University where she has been teaching medical entomology, taxonomy and biodiversity of insects and other invertebrates since 2004. Her research program is focused in part on the ecology, taxonomy and biodiversity of muscoid flies, a group on which she has published over 20 scientific articles. More recently, she has also been working on the development and dissemination of arthropod identification tools accessible to the general public. She is the instigator of eTick.ca, a citizen-science project aiming at the monitoring of tick populations in Canada through the identification of images submitted by the public. Agriculture and Agri-food Canada, the Public-Health Agency of Canada, and the Natural Sciences and Engineering research council currently fund the bulk of her research.