eTick.ca: A public platform for image-based identification and population monitoring of ticks in Canada 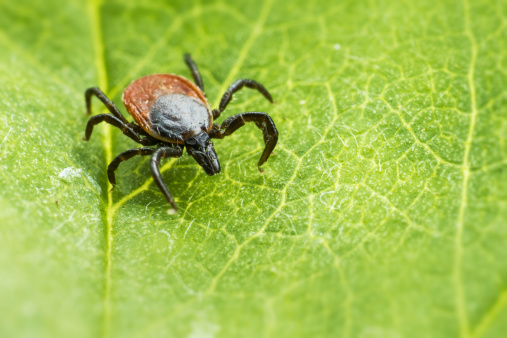 Lyme disease and the rapid geographical range expansion of tick species in Canada are important issues for public health. A new citizen science project called eTick.ca invites the public to participate in the monitoring of ticks in Canada by submitting tick photos via a web platform for identification by a professional. The identification results, combined with other data such as collection date and locality are then mapped so that all website visitors are able to visualize the information related to species, date and/or geographical area. Access to eTick.ca and the regional maps of tick submissions is freely available online.

How Does it Work?

Users submit pictures of ticks they have collected via a simple web interface. It usually takes less than 24 hours for a regional expert to identify the tick species and for an automatic message to be generated via an email back to the user. The email contains information regarding the tick species they found and health-related tips and resources for humans and pets that might have been exposed to the bite of that tick species. In addition, upon identification, a dot appears on a public map on the website where the tick was acquired.

The ticks in the photos submitted to eTick.ca come from many sources: humans, pets (cats, dogs, rabbits, ferrets, etc.) or even wild animals such as moose. Some ticks have been photographed roaming in the wild while others were spotted in animal traps. This wide range of tick submissions allows eTick.ca to explore the diversity of ticks on a large scale and complements provincial surveillance programs with data that is standardized cross-provincially.

How was it Created?

The platform was created in 2014 by Professor Jade Savage, a biologist at Bishop’s University in Sherbrooke, Quebec, with the financial support of the Public Health Agency of Canada (PHAC) and the collaboration of the Institut national de santé publique du Québec .

Initially, the platform was designed to test the feasibility of identifying tick species based on pictures submitted by veterinary clinics in the province of Quebec. Once it was demonstrated that ticks could be identified accurately based on pictures and that the eTick.ca interface was user-friendly, the identification services were opened to the general public.

In 2018, the eTick.ca project was awarded a 3-year grant from the Infectious disease and Climate change fund (Public Health Agency of Canada) to expand the identification services to Ontario and New Brunswick, modernize the user interface, and develop a mobile eTick.ca application. Plans exist to offer eTick.ca to other provinces in the future.

How is the Data Being Used?

Prevalence data from the eTick.ca platform can be combined with active surveillance data to evaluate tick infection levels for various tick-borne pathogens in specific areas. The platform can also be used to flag the arrival of new species in specific geographic areas. For example, eTick.ca has detected that the blacklegged tick is the most common species found on humans and the species has been detected as far north as the Saguenay region of Quebec. Other species like the American dog tick have been found even further north in Kenora, Ontario.

Awareness of ticks and the pathogens they carry is important. Human populations in regions where ticks have only recently established are usually unaware of the risks these ticks can pose to health and tick bites will often go unnoticed. eTick.ca provides public health practitioners and the general public with up-to-date information about what tick species are currently being found as well as changes in their geographical distribution. This data can help focus campaigns on tick bite prevention and direct tick and host population control activities.

Although most of the attention for climate change is focused on direct environmental effects like higher frequencies of floods and wildfires, it is very important to consider indirect consequences like the northward expansion of pests that threaten food security, health and some industries such as forestry. In some temperate regions of the northern hemisphere, ticks are now the most important vector of infectious diseases to humans. New tick species are not only arriving and surviving in Canada but climate change increases the distribution of animals (mostly birds and mammals) that act as reservoir hosts for pathogens that ticks can acquire and transfer to humans. Moreover, ticks and their hosts are likely to have a better chance of surviving milder winters in regions where cold winters would typically kill them (e.g. Quebec City or Thunder Bay).  Tools like eTick.ca will be essential in tracking and reacting to these changes.

Pierre Chuard obtained his PhD in behavioural ecology at Concordia University, Montreal, in 2017. He currently works as a research associate in the laboratory of Prof. Jade Savage at Bishop's University. He is the project coordinator of eTick.ca, a web platform identifying ticks using pictures submitted by the public to better monitor tick populations in Canada. In collaboration with public health officials, they aim at improving prevention and awareness to vector-borne pathogen exposure. Pierre is also a contract faculty at the same university where he currently teaches Advanced Ecology.

Jade Savage completed her PhD in entomology at McGill in 2004. She is currently a full professor at Bishop’s University where she has been teaching medical entomology, taxonomy and biodiversity of insects and other invertebrates since 2004. Her research program is focused in part on the ecology, taxonomy and biodiversity of muscoid flies, a group on which she has published over 20 scientific articles. More recently, she has also been working on the development and dissemination of arthropod identification tools accessible to the general public. She is the instigator of eTick.ca, a citizen-science project aiming at the monitoring of tick populations in Canada through the identification of images submitted by the public. Agriculture and Agri-food Canada, the Public-Health Agency of Canada, and the Natural Sciences and Engineering research council currently fund the bulk of her research.