Mosquitoes in a changing climate

Mosquitoes are vectors of numerous diseases worldwide. However, only certain species of mosquito can carry diseases, and even fewer of these species can survive Canada’s harsh winters. Of Canada’s approximately 80 known mosquito species, only a small proportion carry disease, the most common of which is West Nile Virus (WNV). Human cases of WNV have been reported across Canada, with the exception of Newfoundland and the Territories. Other endemic diseases such as Eastern equine encephalitis (EEEV), Jamestown Canyon virus (JCV) and snowshoe hare virus (SSHV) have been reported in small numbers. While EEV cases have so far been confirmed only in Ontario, both JCV and SSHV are more widely distributed across Canada, including in the Territories. While there have been a number of cases of Zika virus detected in travellers returning to Canada from abroad, only one of the two species that transmits Zika virus, Aedes albopictus, has become established in Canada. So far, this established population remains small and in a very limited part of Southwestern Ontario.

Mosquito-borne viruses are maintained in nature in a cycle between female mosquitoes and specific animal hosts. Mosquitoes can then transmit the virus to humans and other mammals like horses, which are considered dead-end hosts as they are unable to transmit the virus further due to an insufficient presence of the virus in their blood. 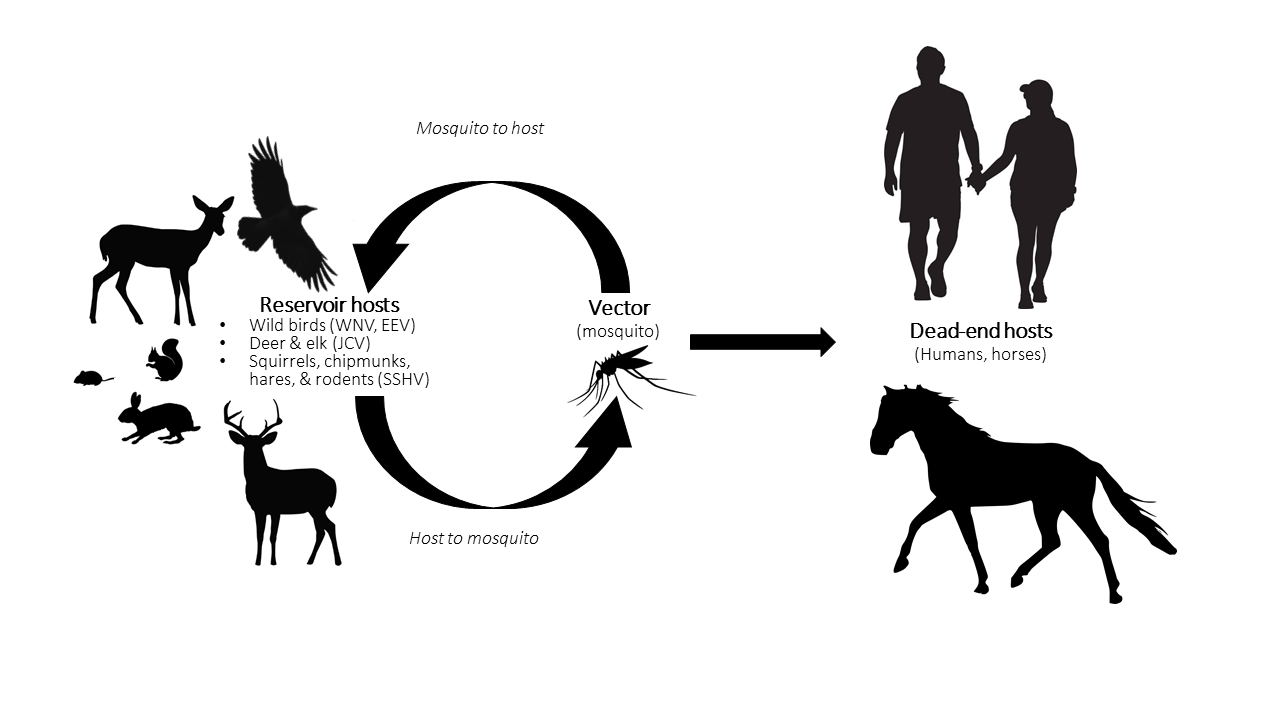 Only certain mosquito species play a role in the disease transmission cycle. Predominant mosquito vectors for each disease include:

Transmission of mosquito-borne diseases are most common from late spring to early fall, and anyone spending time outdoors during this time should take precautions to avoid getting bitten, such as using appropriate insect repellants and wearing permethrin-treated clothing and gear. With WNV in particular, serious illness is more likely to occur in people who are over 50, with underlying chronic conditions, and/or weakened immune systems.

Given that climate is so closely linked to the ecological range, population dynamics, and disease transmission dynamics of mosquitos, there is growing concern around the impacts of climate change on mosquito-borne diseases. This includes both the effects of warmer seasonal temperatures and extreme weather events, such as droughts and flooding, on suitable habitat and proliferation. For example, several exotic mosquito vectors, such as Aedes albopictus (associated with Zika, chikungunya, dengue) and Aedes japonicus (associated with chikungunya and dengue) have been established in Canada through northwards habitat expansion from the U.S. and via international importation. Climate change will also affect the suitable range of avian and mammalian hosts that carry these diseases, and thus directly impact disease transmission cycle.

To control mosquito populations and prevent disease transmission, integrated mosquito management (IMM) is generally seen as the gold standard. IMM is an ecosystem-based strategy composed of five core components, all of which play a critical role in effective management: 1) surveillance, mapping, and rational setting of action thresholds; 2) physical control of mosquito habitats through manipulation; 3) source reduction, biological control, and the application of targeted insecticides; 4) monitoring insecticide efficacy and resistance; and 5) regularly engaging the community.

The resources below are intended to assist Environmental Public Health practitioners with understanding these core aspects of IMM, and highlight emerging literature examining the impact of climate change on mosquito-borne diseases in Canada.

Monitoring and surveillance of mosquitos in Canada

Guidance for physical and biological control of mosquito populations

The impact of climate change on mosquito-borne diseases:

This list is not intended to be exhaustive. Omission of a resource does not preclude it from having value.

Permission is granted to reproduce this document in whole, but not in part. Production of this document has been made possible through a financial contribution from the Public Health Agency of Canada through the National Collaborating Centre for Environmental Health.