The invasive European fire ant: Are they more than picnic pests? 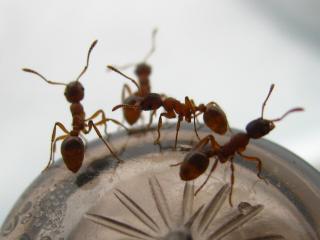 Why do European fire ants matter for Canadians?

The European fire ant is an emerging problem insect across Canada. Formally named Myrmica rubra, the European or ruby fire ant is a very small, reddish, aggressive ant that can bite and then sting a person or pet multiple times. Myrmica rubra  is part of the same sub-family (Myrmicinae) as the notorious Solenopsis or true fire ant that causes serious problems and is endemic to the southern United States. In Canada, European fire ants have been detected in almost all provinces and are considered an invasive species of concern that is associated with significant risk to people, the environment and even the Canadian economy.

Where are European fire ants found in Canada?

Many regions in Canada are currently addressing invasive European fire ants;  only Saskatchewan and Manitoba have not reported infestations to date. In Newfoundland, researchers estimate that the ants have been in the province since the 1970s, although most provinces have reported significant infestations since the late 1990s and early 2000s. British Columbia in particular has seen a recent, dramatic rise in colonies, particularly in the Lower Mainland, Fraser Valley and southern Vancouver Island.

The United States faces similar invasive problems with Myrmica rubra. Officials in Maine alerted communities about European fire ants in 1986, although it is believed this species was present even decades before albeit in fewer numbers. According to a 2009 Global Invasive Species Database summary, the ants have now been reported in Massachusetts, New Hampshire, Rhode Island, Vermont, Pennsylvania and New Jersey, Connecticut, New York and more recently, Washington State.

Unlike carpenter ants which can nest indoors and have the main colony (and queen) established outside. European fire ants only form colonies outdoors, sometimes in numbers so significant it makes it impossible to comfortably sit on lawns and grasses. Researchers have determined that in North America, European fire ants prefer moist soils and shade. The ants build dense colonies that are often tricky to detect in and along waterways and tree roots, and under logs, leaf litter and rocks. The ants can live in rural, urban, and suburban environments, nesting in soils that even run up against hard substrates.  The ants are more active from late spring to early fall when temperatures are warmer.

European fire ants are typically hard to spot as they are very small, and their nests do not create mounds or disrupt soils. Each colony has multiple queens (polygynous) that span across a broad network of nests (polydomous). If their nests are disturbed, the ants aggressively attack and can swarm people or pets in large numbers. As nests are hard to detect, it is unfortunately easy to step on or near colonies and end up being swarmed and stung.

What are the health impacts of bites and stings?

True to their name, the sting from a fire ant causes painful burns. After biting, the ant uses its stinger to release a venom comprised of alkaloids, and proteins that can cause allergic reactions. Stings result in burning, itching and localized inflammation that can last for many days. Anaphylactic reactions or swollen limbs from fire ant stings, although rare, are well documented and can develop even hours after the sting has occurred.

During a fire ant attack, it is recommended that people brush off the ants with swift movement of the hands. Squishing or washing the ants off the skin are not recommended as these methods aggravate the ants further, causing them to increase their frequency of stinging.

What about ecological impacts?

Beyond the impact on people and pets, the European fire ant is capable of displacing native ants and impacting the biodiversity of other plants, birds and local insects. This can interrupt pollination and seed dispersal patterns and interrupt other natural cycles. European fire ants have also been implicated in a process known as invasional meltdown, where two invasive species help each other gain dominance in an ecosystem. In this case, the European fire ant is thought to help spread the seeds of the invasive Greater Celandine plant and significantly disrupt local wildflower populations.

Are there economic impacts?

As much as there are health concerns there can be economic impacts. European fire ant colonies can render outdoor environments almost impossible for people to use. Metro Vancouver’s Best Management Practices report estimates European fire ants could cost the province hundreds of millions of dollars in damage to parks, schools, households, golf courses and other green spaces.

Infrastructure can also be damaged by fire ant infestations. CP Rail was recently required to undergo the costly process of removing old railroad ties and the soil around them in order to reduce European fire ant colonies along the Arbutus corridor in Vancouver.  Vancouver’s Airport Authority has also been battling fire ant infestations as a related species has caused costly runway delays.