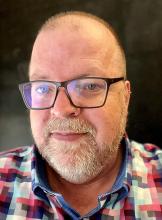 Peter’s focus has been working in and supporting communities through Environmental and Public Health (EPH) by encouraging practitioners and contributing to improving legislation, systems, resources, and tools by advocating for rural and remote areas of Canada.

With 26 years of experience in EPH, Peter has grown in a variety of EPH roles over the years. He began his career as a Public Health Inspector in Ontario, delivering general EPH programs in both rural and urban areas for 8 years. He then moved North for “the experience” and has enjoyed living and working in Canada’s Arctic ever since. Peter spent 10 years in Iqaluit, Nunavut working for the Department of Health as an EH Officer, an EH Consultant and a Health Emergency Planner. He then spent 8 years in Yellowknife, Northwest Territories (NWT) as Chief Environmental Health Officer in the Department of Health and Social Services (DHSS).

As a territorial representative, Peter has been a member of the Canadian Drinking Water Committee for most of the last 18 years (a Federal/Provincial/Territorial group), as well as a past member of Committee on Health and Environment and other FPT committees.

During the state of public health emergency in the NWT during the COVID-19 pandemic, Peter played a significant role in the response in collaboration with the NWT’s Office of the Chief Public Health Officer. In August 2022, Peter became the Director of Population Health for DHSS. He is eager to fulfill the responsibilities that come with this new leadership role.