From ship to shore: Sightings of Asian Giant Hornets in Canada’s west coast 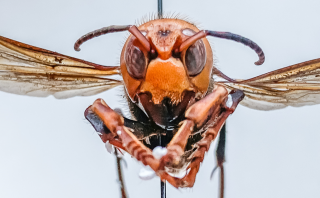 Recent sightings of the Giant Asian Hornet- dubbed the murder hornet by some sources- have left many wondering whether these enormous, aggressive insects are a new insect of concern.

Their usual habitat is the temperate and tropical maritime regions of East and South Asian but that seems to be changing. Nanaimo, BC beekeepers first noticed three Giant Asian hornets in August 2019. A hunt ensued and by September, an underground nest had been discovered in a park. This nest was successfully destroyed, and some hornet specimens were preserved for future research. Another hornet was spotted later in 2019 near White Rock BC. Meanwhile, a beekeeper in Custer, WA, near the Canadian border, reported finding piles of decapitated honeybees near his hives around the same time. The evidence was mounting that these hornets were successfully making their way to this continent. How many are here and how far they have travelled remains unclear.

What is the Asian Giant hornet and why is it a problem?

The Giant Asian hornet’s, Vespa mandarinia (V. mandarinia), is the largest hornet in the world. Queens can grow to 5 centimeters long with workers just a centimeter or so shorter. It is not just their length that is remarkable, Asian Giant hornets have a distinctive yellow-orange head that ends in large mandibles designed to kill and eat other insects. Their bodies bear distinctive bands of orange, black or dark brown and the tail contains a sharp, 6mm-long stinger. The wingspan ranges from four to seven centimeters and the hornets have been described as resembling small hummingbirds while in flight. Indeed, a Japanese translation for this species is “Giant Sparrow Hornet”.

V. mandarinia are the apex predators of hornet world. They hunt medium to large sized insects, particularly honeybees, although they can also attack other wasps, and mantises. They are efficient killers as their giant mandibles allow them to capture and decapitate insects swiftly and easily. Invading hornets are capable of decimating entire honeybee colonies in a single day.

In other parts of the world, honeybees have developed strategies to defend themselves against the striking hornets. The most effective is a form of mobbing (referred to as a “bee ball”) that heats the air around the hornet and douses them with CO2. West coast honeybees have not yet developed any techniques to defend themselves and this leaves an  already stressed BC honeybee industry at further risk. Honeybees are a key player for the viability of the crops and food production in BC and any threat to their survival must be taken seriously.

Where do Giant Asian hornets come from and how did they get to Canada?

The Asian Giant hornet’s normal habitat is East Asia, ranging from Taiwan to northern Japan. They colonize forested, temperate regions and are rarely found in urban areas. Unlike most hornets, V. mandarinia nest underground in areas around tree roots or abandoned, narrow burrows made by other creatures.

Genetic tracing has determined that the hornets found in Nanaimo likely came from Japan, whereas the hornets in White Rock and Blaine were of Korean origin. How the hornets arrived in Canada remains unclear, although it is suspected that they travelled in cargo on ocean-going vessels. International trade between Asia and the Pacific West Coast is brisk, and this increases opportunities for hitchhikers to expand their habitat.

Do Asian Giant hornets pose a risk to people?

Giant Asian hornets are honeybee predators and generally ignore humans unless they are disturbed or agitated. When they sting, the results can be serious because their large and barb-less stinger allows them to sting multiple times. Their venom, ounce for ounce, is less toxic than other wasps or bee species, however, they deliver more venom per sting due to their larger size. The hornet’s stinger is also quite large, and each sting can result in significant pain, inflammation and damage to the surrounding tissue.

If you are bitten by a Giant Asian hornet, the treatment is similar to that for other bees or wasps. Use ice to reduce pain and swelling and seek medical attention if you received multiple stings or if you develop more severe symptoms.

Preventing these new hornets from becoming established in North America is important as they could have a significant impact on honeybee populations and public enjoyment of parks and forested campgrounds.

There is little concern about whether they can expand to the colder and drier regions of Canada and no sightings have been reported yet on the East Coast. It is still unclear  whether the Asian Giant Hornet can survive and propagate in the Pacific Northwest. While the mountains and temperatures may be similar to their Asian home, the types of trees that support the hornets in the early stages of their life (such as oaks) are less common in Canada’s coniferous forests. The Nanaimo nest was thought to have been started by an imported, fertile queen, although time will tell if others have been able to survive over the winter, making the next few months key to determining how great a problem the hornets will pose for the province.

Vigilance is key to preventing new colonies from becoming established. Attention to cargo items where insects can hide, such as wheel wells of cars, is important and it is speculated that railway shipments could potentially spread the hornets inland as well as up the coast of the province. The province is calling on people to report sightings of Giant Asian hornets to:

Nicol AM. From ship to shore: Sightings of Asian giant hornets in Canada’s west coast [blog]. Vancouver, BC: National Collaborating Center for Environmental Health; 2020 May 19. Available from: https://ncceh.ca/content/blog/ship-shore-sightings-asian-giant-hornets-canadas-west-coast.