Safety considerations for cycling during the COVID-19 pandemic 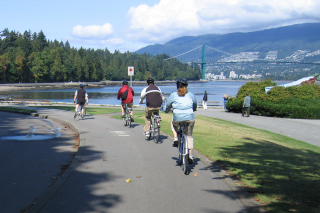 Over the past few months, there have been numerous reports of increasing numbers of people riding bicycles in many Canadian cities. There are also expectations that during the warmer months, cycling will remain popular especially if other options for physical activity continue to be limited by measures to contain the community transmission of the SARS-CoV-2 virus (e.g., limited access to sport and fitness facilities).  Although cycling during the pandemic is being promoted by agencies such as the World Health Organisation, concerns have been raised about possible virus transmission risks associated with this activity.

If streets and pathways become more crowded with cyclists and pedestrians, maintaining the recommended two-metre physical distancing may not always be possible. Currently, the BC Cycling Association advises cyclists to ride alone where there are fewer people and spreading out is feasible. Cyclists are also advised to maximise distances when they pass, follow or lead others. Some media articles advocate using masks in order to protect others but several point out that face coverings may be difficult to use properly while exercising because they become wet and may impair breathing.

There has been some questioning of whether the two-metre physical distancing recommendation is adequate for cycling. A recent working paper using aerodynamic models of cycling, running and walking found that forward momentum could create “slipstreams” containing droplets that could expose people as far away as 20 metres behind a cyclist and 5-10 metres behind walkers and runners.  Several experts in sports and environmental medicine also advise that the volume and rate of breathing due to exertion may propel respiratory droplets further than two metres.

In order to determine whether cyclists should practice greater physical distancing or wear masks, more research needs to be done in outdoor environments where cycling takes place. In particular, we need to answer questions such as:

Using bike share services may also pose transmission risks via contaminated surfaces on bicycles or docking stations (e.g., handle bars and locks). Although current evidence on fomite contamination is from experimental studies, results have provided direction for real-world conditions. For example, findings that SARS-CoV-2 remains viable on plastic and steel for up to several days and on aluminium for several hours have informed advice emphasizing the importance of personal protection (e.g., hand washing and sanitizing, avoiding touching one’s face) as well as cleaning and disinfection protocols for bike share companies and their clients.

Measures to ensure safe cycling during the COVID-19 pandemic

Transportation departments, often in consultation with public health units have implemented a variety of measures to accommodate the increase in cycling; some traffic lanes have been repurposed as bike lanes and segments of streets have been closed to motorized vehicles. The purpose is to ensure that cyclists and pedestrians alike can remain two-metres apart and to prevent collisions between vehicles and bicycles. There has been some debate  in the media about whether alternatives such as widening bike lanes to allow for laterally staggered rather than single file riders is needed. To the best of our knowledge, such measures have not been implemented but some public health units recommend staggering and maintaining greater distances behind runners and cyclists. Some bike sharing services have closed for the duration of the pandemic in order to minimize transmission risks. Those that have remained open are practicing more vigilant cleaning and disinfection of bicycles and docking stations and are advising clients of self-protection practices.

Accommodating an increase in commuting may require additional considerations. The timing of commuting is conditioned on work hours so many cyclists may be travelling at the same time. Thus, interventions could include surge capacity (e.g., temporary bike lanes during peak hours), speed limits for cyclists to help maintain distancing and additional infrastructure for secure storage capacity (e.g., racks in public places and schools, workplace bike rooms).

The observed increase in cycling is being encouraged as a safe and healthy form of outdoor recreation during the COVID-19 pandemic and facilitated by increasing public space allocated to riders. These measures are accompanied by signage and other forms of public communication to ensure that all users of roads and pathways are informed of changes. More restrictive measures such as requiring masks or greater distances between cyclists or staggering have not yet been justified by evidence and would present a greater challenge to transportation planners.

For more information, on cycling during the COVID-19 pandemic, see the following:

Freeman S. Safety Considerations for Cycling During the COVID-19 Pandemic [blog]. Vancouver, BC: National Collaborating Center for Environmental Health; 2020 May 29. Available from: https://ncceh.ca/content/blog/safety-considerations-cycling-during-covid-19-pandemic.