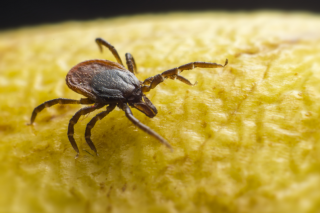 The public health threat posed by tick populations in Canada is clearly increasing. Tick populations are expanding in terms of species types and their geographic range of spread. Researchers have been able to estimate that ticks are heading northward at a rate of about 35-55 kilometers per year. This expansion is made possible by shifts in climate as well as animal migration patterns, deforestation, urbanization and globalization. Ticks now populate more regions of the country than ever before and a number of new tick-borne diseases have emerged and re-emerged as public health concerns.

Surveillance of tick populations has identified the growing number of regions across Canada where blacklegged ticks (Ixodes scapularis and Ixodes pacificus) are emerging and endemic. Most of Nova Scotia, along with regions of Manitoba, Ontario, Quebec, New Brunswick and British Columbia have established tick populations, generally along the southern border. Since the 1990s, Quebec’s Laboratoire de santé publique du Québec (LSPQ)has been monitoring populations of Ixodes cookei, the tick generally associated with the woodchuck rather than deer. This tick’s geographical home is also expanding and I. cookei have been detected in all provinces from Manitoba eastward. The Lone Star tick (Amblyomma americanum), a larger and more aggressive tick than Ixodes species, is also being detected more frequently in Canada. Endemic to the southeastern USA and Mexico, the Lone Star tick has now been detected in Ontario, although populations may not yet be fully established. US research has noted that the Lone Star tick’s range is expanding significantly northward.

How far north the various tick populations can survive and become established  in Canada is still unknown. Ticks can move short distances on hosts such as deer or rodents but migratory songbirds can transport ticks from subtropical regions to areas quite far north. Predicting whether these populations become established is challenging, particularly in light of climate change. Regional warming and cooling patterns in specific micro-climates can influence whether tick populations overwinter or die off.  Researchers are developing models and tools that seek to generate a better understanding of which regions will be most at risk for emergence or re-emergence of specific tick species.

Canada’s federal framework on Lyme disease outlines mounting concerns in Canada about tick-borne diseases.  Across Canada, there has been a distinct rise in tick-related infections beyond Lyme disease. Anaplasmosis (also known as HGA- Human Granulocytic Anaplasmosis) often presents as flu like symptoms that tend to appear 1-2 weeks post tick bite. Manitoba , Ontario, southern Quebec, New Brunswick and Nova Scotia are finding increases in human HGA cases. Human cases of the Powassan virus, a potentially fatal encephalitic condition transmitted  mostly by I. cookei have been detected in Ontario, although, to date, cases of Powassan are still rare. The emergence of the Lone Star tick in Canada also presents new conditions of concern.  This tick has been linked to a range of diseases such as Erhlichiosis and the Heartland virus and more recently with alpha-gal syndrome can lead to an allergy specific to red meat.  Other serious conditions, including Babesiosis and Borrelia miyamotoi disease are predict to emerge in Canada as tick populations grow.

South of the border, the US Centres for Disease Control are monitoring the threat posed by the recent invasion of the Asian longhorned tick (Haemaphysalis longicornis). First detected in New Jersey in 2017, the tick has now spread to eight more states in only two years.  This tick feeds on pets, wildlife, livestock and people. Unlike most ticks, this species can reproduce without mating, laying up to 2,000 eggs at a time. As a result, thousands can be found in localized areas or on cattle, pets or people. In regions when it has become endemic, this tick poses a serious threat to livestock. Asian longhorn tick bites can result in a range of diseases including Lyme, Powassan virus and other encephalitis conditions. To date, no human cases have been reported in the US and, as of early 2019, the Asian longhorned tick has not yet been detected in Canada.

Importance of Environmental Management and Tracking

Reducing the public health risk posed by ticks would benefit from an integrated management approach that draws on expertise from public health as well as other disciplines. Advances in wildlife and landscape management offer new solutions for controlling tick populations. Better control and treatment of tick hosts such as deer, mice and other small mammals is possible through strategies such as population control, topical acaricide use and physical barriers that prevent hosts from living near humans.

Landscape management also offers strategies to decrease the number of ticks residing in an area. Reducing shaded and woody areas in parks and yards, keeping grasses short and growing plants the require less water can alter landscapes to make them less tick friendly. These strategies can be used by residents as well as urban planners and those responsible for designing and maintaining parks.

Surveillance of ticks by public health and veterinary communities is also key for recognizing where environmental management will be needed. Canadian researchers have determined that passive or voluntary submission of ticks is useful for surveillance efforts.  A number of new resources exist that help support this type of tick surveillance including the eTick web portal that offers electronic submission of tick images and allied data.

Controlling tick populations and minimizing contact with humans and companion animals are important tools for the prevention of Lyme disease as well as other new tick-borne diseases. This effort will require collaboration from a range of experts across public health, veterinary science, wildlife biology, landscape design and urban planning.