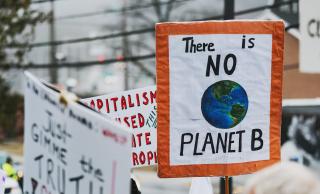 While COVID-19 will continue to demand our attention as public health professionals, we cannot ignore the looming public health crisis presented by climate change.

The 2016 Director-General of the World Health Organization described climate change as “the defining issue for the 21st century” for public health.  On a global scale, climate change is already threatening the health of hundreds of millions of people each year with extreme weather events, flooding, heat waves, infectious diseases, and growing rates of under-nourishment and malnutrition.  The 2018 Lancet Countdown on Health and Climate Change reports found that, in 2017:

These health risks are occurring with 1oC of global warming so it is distressing to know that global warming is expected to reach 1.5 to 2oC  between 2030 and 2052 if we continue to emit greenhouse gases at the current rate.  When the Inter-governmental Panel on Climate Change (IPCC) examined the impacts expected with 1.5 and 2oC of global warming, it painted a picture of catastrophic proportions for 2oC of global warming for ecosystems, human health and human society.  It found, for example, that several hundred million more people would experience climate-related poverty in 2050 if global warming reached 2oC, than would if it were limited to 1.5oC.

In Canada, we have experienced fewer health impacts from climate change than people in many other countries because of geography and a well-developed public health infrastructure, but we are not immune.  Climate change is already harming the physical and mental health of Canadians as heat waves, wildfires, floods and hurricanes increase in frequency and intensity, permafrost melts, sea levels rise on three coasts, and the range of vector-borne diseases shifts.

Each of these events put the health of Canadians at risk.  Extreme heat can produce heat exhaustion, heat strokes and deaths, particularly among older adults, people with chronic diseases, those who are socially isolated, and those who have no access to cool spaces.  Exposure to wildfire smoke has been associated with acute respiratory impacts and premature deaths.  Emergency evacuations and population displacement have been linked with trauma and post-traumatic stress disorder.

The other climatic changes are also affecting the health of Canadians.  Melting permafrost and unstable ice roads can increase food insecurity in Canada’s north as access to traditional food sources is decreased.  The conditions for Lyme disease, a neurological disease carried by ticks, now exists in five provinces and more intense and prolonged pollen seasons are expected to exacerbate hay fever and asthma.

While climate change will affect everyone, it will have a disproportionate effect on those already experiencing health inequities.  Indigenous populations, racial minorities, people living with chronic diseases or disabilities, and people living on low incomes who are already at greater risk of health impacts in Canada, are more likely to be harmed by extreme heat, food insecurity, flooding and other climate-related health risks.

The management of climate-induced health risks will be complicated this year by our need to protect people from COVID-19. The increased levels of air pollution that can result from wildfires are likely to exacerbate the risks associated with COVID-19, while the need to manage COVID-19 will have to be considered when evacuating people because of floods and wildfires, and when providing programs to protect people from extreme heat.

We Need to Act Quickly

We are running out of time to avoid the most severe impacts of climate change.  The IPCC concluded that we must collectively cut climate emissions to net zero by 2050 if we are to limit global warming to 1.5oC.  This means that we must take aggressive steps to cut climate emissions quickly.  This will require a significant transformation of our economy, our communities, and our public policies, as we transition away from the production and use of fossil fuels such as coal, oil and natural gas.  As one of the top ten emitters of greenhouse gases and a wealthy country, it can be argued that Canada has an obligation to move more quickly to protect those countries that are hardest hit by climate change.

The experience with COVID-19 has demonstrated that we are capable of moving boldly and quickly when the need for action is apparent.  It has also brought into relief many of the systemic problems in our society which lead to health inequities.  Many people are hoping that the investments needed to rebuild our economy from the COVID-19 shut-down can be used to create a more equitable and sustainable society.

Public Health Professionals have an Important Role to Play

The good news is that many of the actions needed to mitigate climate change, such as investing in renewable energies, energy efficiency, public transit, active transportation and sustainable agriculture, can produce fairly immediate and significant health benefits for Canadians by reducing air pollution, increasing physical activity, encouraging healthy diets, and fostering social equity and mental health in our communities.

In addition, a number of the actions needed to make our communities more resilient to climate change and other disruptions, such as the addition of trees, greenspace and bike lanes in our urban centres, can present opportunities to improve public health.

Public health professionals are well situated to promote climate solutions and resilient communities, and to do it in a way that meets the needs of the vulnerable and low-income populations in our communities, for several reasons:

On June 25, 2020 at 3:00 EDT, NCCEH will host a webinar titled, Responding to Climate Change as Public Health Professionals, in which I will summarize the health risks associated with climate change, introduce people to the Climate Change Toolkit for Health Professionals (also in French) that I produced for the Canadian Association of Physicians for the Environment (CAPE), and discuss the ways in which public health professionals can engage in this movement for change.

Kim Perrotta has a Master’s degree in Health Science and 35 years of experience working on environmental issues from a health perspective for organizations such as Toronto Public Health, the Ontario Public Health Association, and the Healthy Canada by Design CLASP Initiative.  She was the Executive Director for CAPE (the Canadian Association of Physicians for the Environment) from 2015 to 2019; during which time she produced and edited the 240-page Climate Change Toolkit for Health Professionals.  She is currently the Executive Director for a newly founded non-profit organization directed by public health professionals, Creating Healthy and Sustainable Environments (CHASE).

Declaration:  I have no commercial or funding interests which present a conflict of interest with this article.