There is growing popularity among pet owners choosing to feed their pets a raw meat-based diet (RMBD) in lieu of standard dried and canned pet foods. Due to the risk of contaminated raw meat and the close interactions between humans and their pets, this growth of RMBDs poses potential risks for human health.

What is a Raw Meat-based Diet?

A RMBD, which may also be called a ‘Biologically Appropriate Raw Food’ or a ‘Bones and Raw Food’ (BARF) diet, consists of uncooked animal products that can either be purchased commercially or prepared at home. Its popularity has largely been driven by claims that cats and dogs fed a RMBD or BARF diet have improved health benefits. While some studies have shown modest improvements in digestion from an altered gut microbiome in pets fed RMBDs, this may be a result of the ingredients used rather than the raw nature of the food itself. Most studies did not compare the raw diet to an identically composed cooked diet, and one study that did so found no significant difference in digestibility feeding a RMBD before and after it had been cooked. Many of the other claimed health benefits of RMBDs such as shinier coats, stronger immune systems or superior bone health remain unsupported by scientific evidence or otherwise extremely limited. Far more evidence on RMBDs point to their inherent risks to human and animal health due to the abundance of harmful bacteria these raw diets harbour, including bacteria resistant to antibiotics. 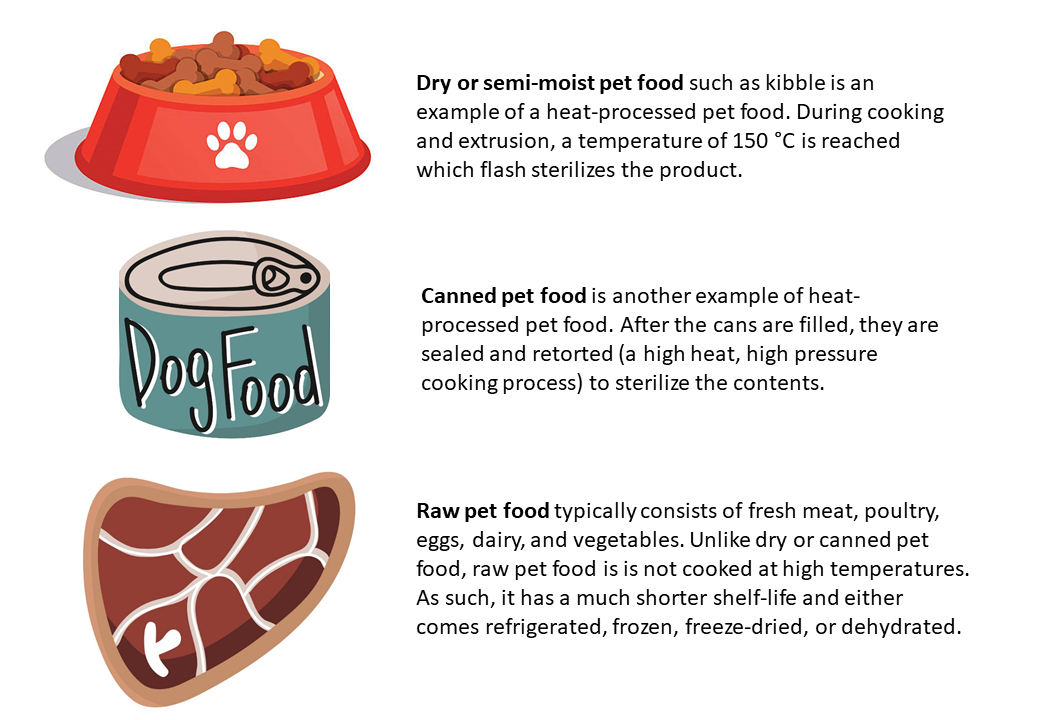 What does the research say about microbial contamination of RMBDs?

Unlike food designated for human consumption and imported pet foods, the Canadian Food Inspection Agency (CFIA) does not require or regulate any specific meat inspection requirements or microbial testing during processing and manufacturing of pet food domestically. Because raw foods do not undergo any type of heat processing or sterilization like conventional pet food, a major concern of feeding pets a RMBD are the high levels of bacteria and parasites potentially present in the food at the time of consumption. Common methods of food preservation used in RMBDs such as dehydration, freezing or freeze-drying foods do not destroy all of these pathogens, and both home- and commercially-prepared RMBDs can subsequently become contaminated.

Numerous studies comparing raw pet foods to heat-processed pet foods have reported higher prevalence rates of bacteria—including Salmonella species, Escherichia coli (E.coli), Campylobacter species, Listeria monocytogenes, Brucella species, and Yersinia enterocolitica, among others— both in the raw food itself and in the feces excreted by pets fed a raw food diet. Of greater concern is that studies have also shown that RMBDs are linked to increased levels of antimicrobial resistant (AMR) bacteria both in homemade and commercially-prepared raw pet food, and in the feces of pets fed a RMBD. One study that examined fecal E.coli from 73 healthy, non-antimicrobial treated Labrador retrievers found that consumption of raw meat was a significant risk factor for antimicrobial resistance.

While antimicrobial resistant bacteria have also been found in standard dried and canned pet foods, several studies have indicated they are present at much lower levels than either homemade or commercially-prepared RMBDs.

What are the risks to human health with feeding pets a raw food diet?

Pet owners often share frequent and close contact with their animals, which increases opportunities for the potential exchange of bacteria (including AMR bacteria) between humans and pets. Certain bacteria such as Salmonella species, Campylobacter species, and E.coli among others can cause illness in humans even if they might not in pets. Antimicrobial resistant strains of these pathogens often pose more serious human health threats due to treatment limitations. The possibility of transmitting AMR bacteria from pets to humans is especially concerning for vulnerable populations at relatively high risk for infection such as infants, the elderly, and pregnant or immunocompromised individuals.

While ample evidence exists for the transmission of pathogens from raw pet food to humans, it is important to point out that the evidence directly linking AMR pathogens to human exposure is weak. Studies in this field have predominantly focussed on the occurrence and characterization of AMR in raw pet food sources or in the fecal matter of pets fed a raw food diet. Yet given methodological challenges, the probability of AMR transfer from pets to humans and the frequency or magnitude of this transfer remains unclear. Nonetheless, a few studies have shown that transmission is possible and seems to occur more frequently when pets themselves are sick. Of note, a study from the Netherlands of dog and cat owners and their pets found evidence that dogs and humans belonging to the same household both carried antibiotic resistant extended spectrum beta-lactamase-producing E.coli (ESBL-E) more often than was expected. The authors suggest that either transmission of ESBL-E is occurring between dogs and humans within the same household or through exposure to the same source. The same study also found that the main risk factor for carriage of ESBL-E in dogs was being fed with raw meat.

It is important to be aware that because pets that consume contaminated raw food diets can be colonized with bacteria that is harmful to humans without exhibiting clinical symptoms themselves, Environmental Health Officers who investigate cases of bacterial diseases such as Salmonellosis should be aware of pets (especially those fed a RMBD) as a possible source. As with AMR in the food chain, evidence-based infection prevention measures and health communication can play a critical role in reducing the spread of AMR through RMBDs and their consequent health risks. Suggested measures that target pet owner behaviour include:

Canada should consider adopting more stringent regulations governing the manufacture and sale of commercially produced raw pet food. A knowledge gap remains around the microbial risks of commercially available heat processed pet foods sold domestically. However, the greatest emphasis should be on regulating the higher risk products, such as raw food. There are several international examples that have developed regulations on the manufacture and sale of pet food, including both the US and European Union. Considerations include:

Leah Rosenkrantz is an EH and KT Scientist at NCCEH.