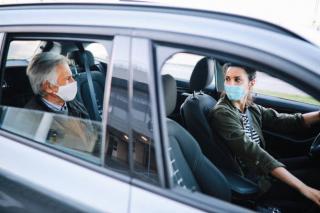 Carpools are informal arrangements for transporting commuters to work or students to school, university, and extracurricular activities. Approximately 12% of Canadian commuters carpooled in 2016. During the COVID-19 pandemic, cost savings and environmental benefits (e.g., reduced emissions, less road congestion) of carpooling are being overshadowed by the concern with SARS-CoV-2 virus transmission risks in a shared vehicle. Travelling in a car with several people who are not from the same household, especially on an ongoing basis, has a medium- to high-level transmission risk. The proportion of commuters using carpools has fallen since the start of the COVID-19 pandemic, according to several surveys. In Durham Region, Ontario carpooling fell from 16% to 11% of people working outside their homes, and in Manitoba the decline was from 16% to 5%. Similar data on carpools for schoolchildren is scarce. Pre-pandemic carpoolers may have switched to active transportation and single occupant trips, both of which have risen during the pandemic.

Shared rides have been linked to transmission events. An early case report documented a Thai taxi driver who was likely infected by two passengers seated in the back of his cab in January 2020. Both passengers wore masks but were coughing. Contact tracing in Singapore from January and April 2020 indicated that people who shared a ride with an infected person had an odds ratio (OR) of 3.07 ([95%CI 1.55-6.08]; p=0.0013) of contracting COVID-19. This was higher than the OR for a 30-minute conversation with an infected person (2·67 [1·21–5·88]; p=0·015). In Connecticut and Rhode Island, contact tracing identified carpools as sources of infection. In BC and Quebec, work-related carpools were also identified with COVID-19 clusters.

The transmission risks associated with carpooling are thought to be associated with time spent in the confined space of cars with people not from the same household. When these individuals breathe, talk, and/or cough and sneeze, they produce respiratory droplets ranging in size from under 1 μm to over 20 μm in diameter. Larger droplets potentially carry higher viral loads and tend to fall to the ground more rapidly than smaller droplets, with the smaller-sized aerosols possibly remaining suspended in the air where they can be inhaled.

Most car interiors are less than two metres wide, a distance small enough to put people within range of larger respiratory droplets. The confined space of the car cabin also creates the potential for aerosol transmission, especially if the windows are closed. One research study has shown that an unmasked, mildly symptomatic COVID-19 patient driving a car with the windows closed and the air condition operating left suspended respiratory droplets and aerosols (0.25-0.5 μm) containing  viable SARS-CoV-2. These particles were extracted from a filter positioned about one metre away from the driver's seat and operated continuously from the beginning of the 15-minute journey until two hours after the patient left the car.

Natural ventilation can reduce the risk of aerosol transmission. Opening windows and doors can lower pathogen concentrations in healthcare settings and opening car windows  as little as three inches introduces fresh air and may prevent virus-laden particles from accumulating.

The effect of opening windows in a vehicle with two occupants was studied using computational fluid dynamic simulations. This study examined how opening different windows in a sedan travelling at 50 mph could alter the air lows within the cabin and influence the rate of air exchanges between the interior and exterior of the car. The passenger was seated in the rear right-hand seat (diagonally behind the driver) to maximize the distance between the two occupants. It was found that transmission risks depended on both air exchange rates and the direction of air flows in the car's cabin. Air exchange was lowest and exposure risks were highest when all windows were closed. The highest air exchange was associated with four open windows. Having four open windows also largely isolated the passenger's air space from the driver's. Separate flows on the right- and left-hand sides of the cabin were created because most air entered through the rear windows and exited through the front without switching sides. A similar separation resulted when the rear left and front right windows were open. In this configuration, the flow of air crossed the cabin diagonally from back to front. Opening a third window, next to the passenger provided additional protection for the driver by drawing some of the passenger's respiratory discharges outside through the adjacent window.

As the number of travellers in the vehicle increases, so does the risk of close contact and exposure. Transmission risks also increase If the participants change from ride to ride. A small stable group of riders and drivers was shown to mitigate transmission in a Dutch modelling study. Shorter rides may also have lower transmission risks.

Carpooling guidance is somewhat variable. Some jurisdictions discourage carpooling while others state that it is risky. Some public health orders have restricted carpooling.

A scan conducted for this blog revealed that four broad themes are commonly included in guidance materials targeting carpools:

Other factors sometimes appearing in guidance materials include having participants conduct a COVID-19 health self-assessment before trips and considering whether a group ride is needed.

Many carpooling guidelines are consistent with public health protocols for physical distancing, the use of masks, hand and respiratory hygiene, as well as the evidence reviewed above on reducing risks by naturally ventilating enclosed spaces. There are also some inconsistencies in guidance protocols that could be resolved. For example, advice regarding the number of participants should be the same whether the carpool is for schoolchildren or adult commuters. With respect to cleaning and disinfection, there are no studies specific to fomite risks in cars. Generally, the risk of transmission from fomites is considered to be lower than from respiratory routes. Therefore, this issue should not be emphasized over other, more important risk factors.

Some advice may be difficult to follow, for example avoiding touching surfaces inside the car and accommodating more susceptible people safely. Since touching surfaces such as door handles and seat belts is inevitable, avoiding face touching and the importance of hand hygiene should be emphasizing. During cold weather, keeping windows fully open may be a challenge. Where possible partially open windows should be considered since they significantly improve air exchange rates compared to closed ones.

Overall, sharing the small space of a car with someone who is not a member of one's household is associated with COVID-19 transmission risks that can be mitigated but not eliminated. Carpools may become transmission nodes that lead to additional workplace, school and household exposure events. For this reason, keeping workplaces and schools safe should include targeting carpoolers with information about the risks and precautions of ride sharing. Similarly, these institutions should have plans to ensure that information about potential exposure events is communicated to ensure that quarantine, self-isolation and contact tracing can be carried out. For workplaces that have encouraged carpooling before the pandemic, informing employees of risks and alternatives during the pandemic could be considered. Similarly, schools and parent organizations could share advice to ensure full information on carpoolers and their contacts is available to the school community.