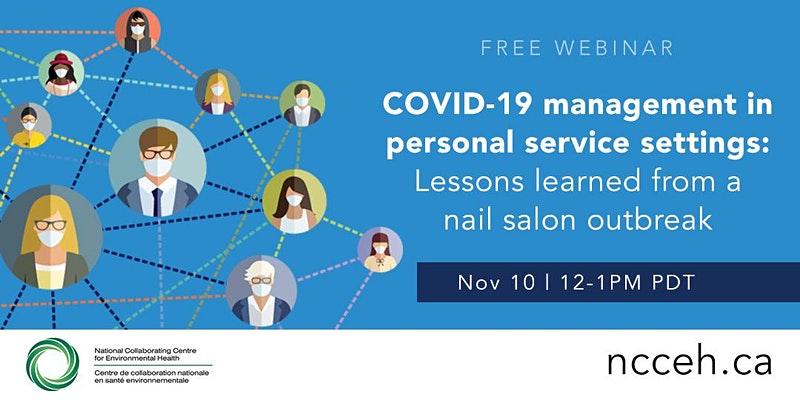 Between June 20 and July 3, 2020 a COVID-19 outbreak associated with a personal service setting (PSS) was detected in the Kingston, Ontario and managed by the local public health unit (KFL&APH).

The outbreak consisted of 37 cases with 14 through direct PSS exposure. 23 cases were from subsequent generations, and a superspreading event led to 14 of those cases. The average age of cases was 38.6 years and 65% were female. One case required hospitalization. Over 10 000 tests were conducted using a multimodal approach, including fixed assessment centres, drive-through testing and targeted testing at outbreak sites. PCR lab results were available within 48 hours of sample collection.

Confirmed cases and their close contacts at high risk of virus acquisition were contacted within 24 hours of identification in 100% of instances. Cases and close contacts were required to self-isolate immediately. Three cases never developed symptoms and two cases of transmission were identified from asymptomatic individuals.

Ultimately three PSS were connected to the outbreak and temporarily closed by KFL&APH. Public health inspectors and nurses were deployed to inspect all PSS in the area. No additional cases were associated with other PSS in the area.

Dr. Azim Kasmani is a resident physician in Public Health and Preventive Medicine at Queen’s University. He is currently completing a rotation at KFL&A Public Health. This year, he is also serving as senior co-Chief resident for the Queen’s PHPM program.

Anthony Li is a second-year medical student at Queen's University who worked at KFL&A Public Health as a research assistant. He also serves as the President of the Queen’s medical society.