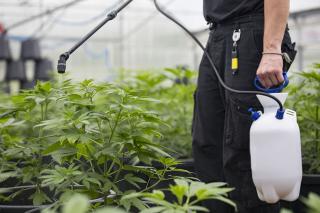 Cannabis legalization in 2018 had multiple public safety and public health objectives. Legalization, it was hoped, would provide adult Canadians with access to high-quality cannabis produced in a safe manner, as well as curtail the flow of revenue to organized criminals active in illicit cannabis production, among other policy objectives.

Since then, cannabis consumers have begun to shift from illicit to legal sources. In the recent 2020 cycle of the Canadian Cannabis Survey, 54% of those who said they had consumed cannabis at least once in the past year indicated that they usually obtained their cannabis from a licensed source (a legal storefront or legal online source). This is compared to 37% of respondents who usually obtained their cannabis from licensed sources in 2019, the first full year in which legal cannabis was widely available under the Cannabis Act and its Regulations, and only 23% in the first quarter of 2018, when only cannabis for medical purposes was available under the Access to Cannabis for Medical Purposes Regulations (ACMPR). Thus, Canadians appear to be buying more of their cannabis from legal sources, but cannabis from unregulated or unknown sources such as illicit storefronts, illicit websites, and sharing among friends, family, and acquaintances, still represents a large fraction of cannabis consumed in Canada.

This blog describes a recent pilot study carried out by BC’s Cannabis Legalization and Regulation Secretariat (Ministry of Public Safety and the Solicitor General) with assistance from the BC Centre for Disease Control and the National Collaborating Centre for Environmental Health. The aim of this project was to increase consumer awareness regarding the potential for unsafe practices when a high-value crop like cannabis is grown without regulatory oversight.

Contaminant testing was carried out on dried cannabis samples seized during enforcement activities carried out by the Community Safety Unit (Ministry of Public Safety and the Solicitor General). In February 2021, 20 samples from six illicit storefronts around Metro Vancouver were submitted to a federally licensed analytical testing laboratory. These samples were subjected to the full panel of analyses to detect chemical and microbial contaminants, as would be expected for cannabis from a licensed producer. The raw data (presented as ng/g and converted to ppm in this document) can be accessed here.

The data obtained were compared against Health Canada’s current LoQs for pesticides and other products that may be co-applied, such as pesticide synergists and plant growth regulators. Values obtained for microorganisms and heavy metals were compared against allowable limits set out in the United States Pharmacopoeia (USP), one of a number of standards that can be used to assess cannabis products based on Schedule B of the Food and Drugs Act, as described in Health Canada’s Good Production Practices. The USP establishes the following limits for contaminants in herbal drugs: total bacteria, 100,000 CFU/g; total mold/fungi/yeast, 10,000 CFU/g; bile tolerant Gram-negative bacteria (BTGN), 1,000 CFU/g; lead, 0.5 mg/g; mercury, 0.1 mg/g; cadmium, 0.3 mg/g; arsenic, 0.2 mg/g.

How common is cannabis contamination?

Because cannabis is a high-value crop, there is a strong incentive to pursue large yields and high profits, even if this means utilizing risky production practices. In addition, because of the difficulty tracing illicit product back to the source, there are few to no consequences for illicit growers who knowingly or unknowingly engage in unsafe practices.

A recent international review found widespread use of unauthorized pesticides in both legal and illicit cannabis. The authors noted that although contaminant levels are often too low to cause acute effects, chronic effects cannot be ruled out. There is also a knowledge gap around the toxic effects of pesticide residues when they are combusted and then inhaled.  In the United States, where legalization occurred without the participation of federal regulators like the Environmental Protection Agency, the use of various and inappropriate pesticides was so widespread it prompted California, Oregon, and Washington, among others, to later develop state-level testing requirements to protect consumers.

What measures are in place to protect legal Canadian cannabis?

In Canada, licensed producers of cannabis are required to follow Health Canada’s Good Production Practices for cannabis and to submit a sample of each batch  of cannabis for chemical and microbial analysis. Health Canada’s requirements for pesticide testing were made more stringent after unauthorized pesticide use triggered a recall of several lots of cannabis for medical purposes in 2017. After the 2017 recalls, Health Canada conducted a series of unannounced inspections and collected 144 leaf, flower, and oil samples, 26 of which were contaminated with one or more of 73 pesticide residues tested for using their validated methods. These findings led to the development of pesticide testing requirements and specific limits of quantification (LoQs) for an expanded panel of 96 active ingredients of pesticide products known or suspected to be used in cannabis. It should be noted, these LoQs are not allowable limits of pesticide residues. Rather, the LoQs represent the minimum value at which a residue can be reliably quantified; any laboratory wishing to provide analytical services must be capable of detecting at least that amount.

The deliberate use of an unauthorized pest control product is not permitted. If an unauthorized product is detected, the producer must carry out a root cause analysis to determine the source of the contamination. If the investigation demonstrates that the pesticide was introduced unintentionally (e.g., use of contaminated equipment) while following good production practices, it may be allowed to be sold if it poses no health risk. Because pesticides are ubiquitous in our environment, it would be impractical to require every legal cannabis sample to be completely free of pesticide residue. However, to ensure that the legal supply is safe, Canada’s Pest Management Regulatory Agency (PMRA) conducts health risk assessments on testing data from legal cannabis samples to ensure that the low levels of pesticide typically observed do not pose a health hazard to consumers.

What about contamination in illicit Canadian cannabis?

Aside from some limited analyses conducted by journalists, very little is known about contaminant levels in illicit cannabis, which is still the primary or typical source of cannabis for many thousands of Canadians. However, without regulation, monitoring, and enforcement mechanisms, there is little reason to expect that unlicensed growers will observe safe production practices in the face of a serious financial threat, such as a pest infestation.

What contaminants were found in Metro Vancouver samples?

Table 1 provides a full description of all contaminants detected in the 20 dried flower samples, and whether the sample would have been considered fit for sale, if it had been a legal product. Overall, only 3 of the 20 samples (i.e., 15%) analyzed would have been deemed immediately fit for sale had they been legal samples, meaning that they contained levels of microorganisms and levels of arsenic, cadmium, mercury, and lead below the USP standards and pesticide residues that were either undetectable or negligible in terms of health risk. Of the remaining samples, nine would have been considered unacceptable for sale, due to the presence of various microbiological indicators of unsanitary production and elevated heavy metal concentrations, as well as the presence of multiple pesticide residues. Eight samples would have required further investigation to determine how pesticide contamination occurred, whether any regulations were broken, and whether any health hazard existed for consumers.

Microbiological analyses detected elevated total bacteria and fungi in some samples, well beyond that considered acceptable for sale. One sample contained Pseudomonas aeruginosa, a water-borne opportunistic pathogen, perhaps indicating the use of unsanitary water for irrigation. Heavy metal analyses detected unacceptable levels of arsenic (a carcinogen) in four samples; arsenic contamination often occurs due to the use of arsenic-containing pesticides, but may also be present at high levels in groundwater.

In total, 24 pesticide residues were detected in 18 samples, and only two samples contained no detectable pesticide residues (Table 1). The majority of samples contained four or more residues, and one sample contained eight residues in total. The fungicide myclobutanil was the most commonly detected pesticide, present in 16 of the 18 contaminated samples, followed by the plant growth regulator paclobutrazol and the insecticide spiromesifen in 11 samples each.

Overall, the frequency of pesticide findings and the variety of pesticides found are striking when compared to legal cannabis. Moulins et al. (2018) analyzed 63 dried flower samples from licensed Canadian producers and detected only two pesticides, myclobutanil and bifenazate, in a total of 8 contaminated samples (13% of all samples), compared to 90% in our study. Similarly, Craven et al. (2021) performed wipe or surface sampling at two cannabis cultivation facilities, and found evidence of 41 pesticides at the unlicensed site compared to only six detected at very low levels at the licensed site. These data highlight the importance of having and enforcing safe production practices and likewise suggest that the samples analyzed here were cultivated without due care to ensure a final product with minimal contamination.

What is the relevance for consumers and for public health?

Our data show that, within the limited sample analyzed from Metro Vancouver, a large proportion of the samples would have been considered unfit for sale due to microbiological and chemical contamination. Conducting a health risk assessment for the contaminants identified in Table 1 is beyond the scope of this document. However, it is important to communicate with cannabis consumers about the broader implications of the data, particularly the importance of understanding and adhering to safe production practices.

The lack of safe production practices and the use of unauthorized pesticides in illicit cannabis may contribute to multiple dimensions of risk, including health risks for consumers, occupational risks, and ecological risks.  Table 2 summarizes information regarding the known human health and ecological risks of the pest control products that were detected here. Because workers engaged in illicit cannabis cultivation may be exposed to these contaminants at levels higher than consumers, Table 2 also shows the World Health Organization Recommended Classification of Pesticides by Hazard, which is based on acute or short-term oral and dermal toxicity in rats. Indeed, eight of the residues detected were considered moderately hazardous and one residue (oxamyl) was considered highly hazardous, which may pose a risk to workers applying these products or handling/processing raw cannabis.

The data highlight the need for consumers to consider the risks when choosing between legal vs. illicit cannabis. In a previous blog, we discussed some of the reasons why consumers may choose illicit cannabis, including price, ease of access, and other purchasing incentives. The trade-off in this decision is the lack of assurance regarding product quality. Although some may obtain their cannabis from a known and trusted source, even well-intentioned unlicensed growers are often unaware what products or practices are harmful.

Some consumers rely on illicit cannabis products to reduce or eliminate their use of more hazardous substances, like illicit opioids, and these consumers may face financial or other difficulties in accessing legal cannabis. Due to the increasingly toxic drug supply, those trying to moderate their illicit opioid use should speak to their care provider before discontinuing the use of illicit cannabis products.

What are the limitations of this research?

There were several limitations to this pilot study:

One of the objectives of cannabis legalization was to protect public health, in part by ensuring access to quality-controlled cannabis. Cannabis license holders are subject to strict regulatory oversight, including product testing, facility inspections, and complaint investigations. When an unsafe product or practice is discovered, steps are taken (e.g., recalls) to ensure no undue risks are posed to consumers.

These protections are entirely lacking in the unregulated market, which is concerning given that cannabis is a high-value crop for which the financial consequences of a pest infestation can be severe. Illicit production without regulatory oversight or guidance on safe practices may result in consumers encountering a contaminated product. Although our data cannot be used to infer health risk directly, the frequency and variety of contaminants found strongly suggest that at least some illegal growers are engaging in practices that are not in the best interests of consumers or their workers. It is hoped that this pilot study will initiate a wider dialogue about where Canadians source their cannabis and will help to inform efforts for public education around cannabis purchase and use.