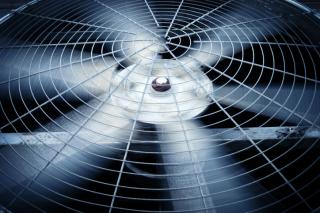 As we return to indoor public spaces, and given the ongoing controversy over whether SARS-CoV-2 can be transmitted in aerosols, there has been intense interest around both the role of ventilation systems in spreading COVID-19, as well as the use of ventilation to reduce transmission.  Currently, SARS-CoV-2 is understood to transmit primarily via droplets from the respiratory system of an infected individual. Modeling studies suggest that larger droplets carry a higher viral load than smaller droplets, meaning that fewer of these larger droplets can produce an infective dose. Because larger droplets fall closer to the source, the risk of transmission can be reduced by increasing the distance from and decreasing the duration of exposure to an infected individual. This understanding underpins the 2-m physical distancing guideline that is a key infection control measure in the pandemic.

In addition to larger droplets, humans also produce smaller particles (evaporated droplet nuclei and aerosols) while breathing, talking, singing, and coughing, and these may persist in the air longer and travel further than 2 m. There is laboratory evidence that SARS-CoV-2 can survive in aerosol form and that particles created by infected individuals may travel some distance from the source. Theoretically, as these smaller particles diffuse outward, infection risk decreases both because the individual small droplets carry a lower viral load and because their dispersal makes it more difficult to “capture” enough of them to establish an infection.

The importance of these viral aerosols in establishing or augmenting infections is hotly contested, especially given the lack of (and difficulty obtaining) epidemiological evidence of transmission. However, whether or not these particles are a major contributor to transmission under normal circumstances, it is logical that such particles should not be allowed to accumulate in enclosed spaces where they might (alone or in combination with larger droplets) lead to disease transmission. As heating, ventilation and air conditioning (HVAC) systems are key to maintaining indoor air quality, clear guidance is needed on how to operate these systems effectively. The purpose of this blog is not to exhaustively review COVID-19 outbreaks (see LeClerc et al. 2020), but to examine a few key examples that provide insight into the role of ventilation in the pandemic.

Have HVAC systems been directly implicated in disease transmission?

To date, there is no evidence of SARS-CoV-2 transmitting via the ductwork of an HVAC system to infect people in other rooms or other areas of the building. In cases where ventilation has been implicated in outbreaks, the ventilation failure affected people in the same room at the same time as the index patient. This is in contrast to known airborne diseases such as measles or chicken pox, which can travel many meters or transmit to others even after the index case has left the presumed site of infection (e.g. pediatric waiting room). Close proximity to the index case appears to be very important in SARS-CoV-2 transmission. Thus, the most likely role for HVAC systems in the pandemic is in mitigating short-range transmission between people sharing the same space rather than in spreading the disease to distant locations. It should be noted that short-range aerosol transmission, as described by Wei and Li (2016), occurs over a slightly longer distance than close-range droplet transmission, but not so long as long-range or "airborne" transmission.

Perhaps the most closely investigated (and most publicized) example of potential short-range aerosol transmission occurred in a restaurant during the early days of the pandemic. Initially, transmission from the index patient to nine other patrons was attributed to a mini-split air conditioner pushing large droplets farther than anticipated. However, further studies using tracer gas measurements and airflow simulations revealed that the room also had minimal fresh air input (<1 L/s per person) and that the exhaust grilles were sealed. The only ventilation was provided by people periodically opening the fire door. This lack of airflow, in combination with zonal air conditioning, might have created a small pocket of air at one end of the room in which droplets and aerosols from the index patient could have accumulated and circulated, resulting in short-range aerosol transmission to those who also spent significant time in the pocket (up to 4 m away). No staff or patrons outside that zone were infected, which might have been the result of this pocket effect or the dilution of particles as they diffused away from the source. Thus, spaces with inadequate fresh air supply and/or unbalanced supply and return airflows may create the opportunity for COVID-19 particles to accumulate and transmit more effectively past 2 m.

Another example in which we might expect to see enhanced disease transmission is when turbulent or strongly directional airflow either prevents particles from settling or directly conducts particles from one person’s breathing zone into another’s. An example of this may have occurred during a bus trip, in which the index patient transmitted the virus to 22 other passengers dispersed throughout the coach. Notably, passengers sitting near the only open window did not contract the virus. The authors attributed dispersal throughout the bus to recirculation through the air conditioning system; however, dispersal could also have been achieved by the strong drafts from the open window.

Because of incidents like these, a great deal of concern has been raised regarding the use of fans and air conditioners. Guidance documents typically recommend against blowing air across several people, but rather to direct the airflow upward or at a wall so as to cool the space without creating drafts. Furthermore, because fans and air conditioners recirculate room air without filtration, they should only be used in rooms that have adequate ventilation. It should also be noted that extreme heat can be a killer. In communities with low COVID-19 case rates, the risk of death due to heat stress may be greater than that of COVID-19. In such cases, fans and air conditioners may be life-saving devices, which can and should be used with the precautions above.

Several other incidents have been broadly or uncritically attributed to inadequate ventilation, such as an outbreak in a call center or in a Zumba fitness class (both in South Korea). This assumes that adequate or even enhanced ventilation could have prevented or limited the outbreak.

In the case of the Zumba class, participants engaged in high-intensity, droplet-generating activity for 50 minutes. More importantly, however, the participants danced back and forth through the turbulent plumes of droplets created by their classmates’ respiration for the entire duration of the class. Similarly, outbreaks like the Skagit Valley choir and the South Korean call-centre outbreak involved crowding, continuous vocalization (talking, singing), and frequent mixing/interaction. Because all of these incidents presented ample opportunity for exposure to those larger, higher-risk, virus-laden droplets, it is unclear whether enhanced ventilation would have had a marked effect in reducing transmission. This is not to say that ventilation cannot effectively reduce droplet counts. Somsen et al. recently demonstrated that opening a window in a well-ventilated room reduced the half-life of 5 um or micrometers droplets to 30 s compared to about 5 min in an unventilated room. However, the most effective means of reducing transmission when people congregate is to reduce the production of droplets (source control or fewer people) and by preventing the overlap of breathing zones (use of partitions and reduced crowding).

Given the risks of under-ventilated spaces, there has been interest in-duct air filters and portable air cleaners as a tool for reducing COVID-19 transmission. Although there is no clinical evidence to show that air filtration affects COVID-19 transmission, properly functioning units with tightly sealed filters should reduce respiratory particles in the air, which may reduce the likelihood of transmission. However, as emphasized above, these devices should not be relied upon as a primary means of infection control, as poor placement or maintenance of the device may render them less effective or create a false sense of security. The first and most important means to reducing transmission in any space is to reduce crowding.

Ventilation systems have alternatively viewed as a dangerous means of spreading COVID-19 or a straightforward technological fix to control the spread of the virus. Neither of these is strictly true. Although there is no evidence of HVAC systems spreading the virus to distant occupants, HVAC systems are also inherently limited in their ability to mitigate the predominant form of transmission (close range via large droplets). Nevertheless, HVAC systems play an important role in healthy indoor air and the lack of ventilation almost certainly amplifies transmission risk. As such, the following should be considered for HVAC systems during the pandemic: