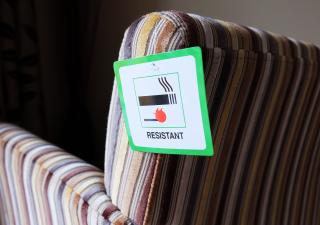 In the 1970s, fire regulations began requiring the addition of chemical flame retardants (CFRs) to a variety of consumer products. Now, we find these compounds in products as diverse as cell phones, televisions, computers, clothing, upholstered furniture, and carpets. While CFRs meet certain standards for slowing the ignition and spread of fires, they also leach chemicals into indoor air and dust and have been found in food and water. Moreover, exposures to many CFRs are associated with adverse effects on the reproductive, neurological, and endocrine systems as well as cancers of multiple organs. An additional hazard of CFRs is that if they burn, they may produce toxic gases such as furans and dioxins. CFRs reduce the likelihood of a fire but do not eliminate it and inhaling these toxic fumes can cause injury, death and cancers.

The Chain of regrettable replacements

Attempts to find safer CFRs have failed repeatedly. Two of the first CFRs, polychlorinated biphenyls (PCBs) and polybrominated biphenyls (PBBs) were classified as ecotoxins and carcinogens in the 1970s and 1980s and replaced with polybrominated diphenyl esters (PBDEs). In the 1990s PBDEs were found to be endocrine-disrupting chemicals (EDCs) and were phased out of use and replaced by organophosphate esters (OPEs). Since the early 2000s, many OPE fire retardants have also been classified as EDCs. These are examples of regrettable replacements, processes in which one toxic compound is replaced with another whose toxicity becomes apparent over time. In the case of CFRs in consumer products, this phenomenon can be traced to fire safety regulations.

Fire safety standards and their role in regrettable replacements

Fire safety standards require that consumer products pass one of two tests that check the length of time before a product ignites. The first is the flammability test that exposes components of products (e.g., upholstery foam) to an open flame. The test can only be passed if CFR’s have been added to the component. The prevalence of CFRs in consumer products is due to the broad application of this test for over fifty years. The second and newer smolder test exposes articles to a low-grade flame such as a lit cigarette and can be passed if a product is made more fire resistant through the use of construction methods (e.g., incorporation of barriers) and materials that are inherently less flammable. The addition of CFRs is often unnecessary.

Trends in the regulation of chemical fire retardants

Although fire safety regulations vary from place to place, there is evidence of a shift towards the smolder test. This has enabled stronger restrictions on the use of CFRs. California, for example, introduced legislation requiring the smolder test for household furnishings. This legislation facilitated the municipality of San Francisco’s ban on the sale of new furniture, certain fabrics, and electronic items containing CFRs in concentrations higher than 1,000 parts per million. The legislation has also been proposed as a national model for the US. The European Union has banned the addition of CFRs to television screens and computer monitors. In Canada, the use of CFRs is still permitted but regulations for certain products including futons, mattresses, and tents already indicate that fire safety requirements may be met without the use of CFRs.

Support for regulatory changes such as those above has been varied. Professional fire fighters have been among the strongest advocates of the smolder test and non-chemical alternatives to fire safety. Fire fighters’ occupational exposures to the toxins produced by burning CFR’s  are associated with elevated cancer risks in this population group. In response to the new California legislation, the International Association of Fire Fighters (IAFF), the professional group representing North American fire fighters issued the following statement:

“Fire fighters across the United States and Canada will be better protected against toxic flame retardants …..”

In contrast, the US Consumer Product Safety Commission has been more reserved about the California standard, recommending further research but has advocated for restrictions on the use of certain OPEs. Consumer and environmental health advocacy groups support the elimination of CFRs on the grounds that safer alternatives to fire prevention are available.

Since finding safe alternatives to some CFR's has proven elusive, the best way of avoiding regrettable replacements may be the use of non-chemical methods for improving the fire resistance of consumer products. Consumer demand could be a driver for reducing the use of CFRs. There is a growing market for goods made without CFRs and some manufacturers and retailers are promoting CFR-free products. In early 2020, the Upholstered Furniture Action Council launched a voluntary program to certify furniture that is free of certain CFRs. Several consumer groups advocate the mandatory labeling of chemical content. Canada has no such requirement and reliably establishing whether a product contains CFRs is a challenge.

A role for public health

Public health has a history of collaborating with fire protection agencies to educate the public about fire safety. These connections could be leveraged to improve the public’s understanding about chemical and non-chemical approaches to fire prevention. Some public health associations in North America have also taken a role in advocating for the chemical safety of products used for fire protection. The American Public Health Association called for the prevention of human exposure to PBDEs and for removing CFRs from insulation foam. In 2010, the Canadian Public Health Association called for a ban on commercial activities related to asbestos. Positions such as these may also have natural allies in initiatives supporting industries and consumers seeking to improve human health and environmental outcomes over a product’s lifecycle. Both Canada and the US have Design for the Environment Programs that foster collaborations among industry, consumers, and government to achieve these aims. Engaging public health and fire protection stakeholders in these types of initiatives could be one mechanism for avoiding future regrettable replacements by promoting CFR-free, fire-safe consumer goods.

Barbara Hales is a James McGill Professor in the Department of Pharmacology and Therapeutics at McGill University. She has served as President of the Society of Toxicology of Canada and the Teratology Society and Co-Chair of the Government of Canada Chemicals Management Plan Science Committee; she is currently Secretary-General of the International Union of Toxicology Societies (IUTOX).  Dr. Hales has published over 160 journal articles and 45 book chapters.

Shirra Freeman is an Environmental Health Scientist at the NCCEH.