Photo credit: US CDC. This digitally-colorized electron microscopic (EM) image depicted a mpox virion, obtained from a clinical sample associated with the 2003 prairie dog outbreak. It was a thin section image from of a human skin sample. On the left were mature, oval-shaped virus particles, and on the right were the crescents, and spherical particles of immature virions.

In May 2022, cases of mpox (the disease formerly known as monkeypox) began to be reported outside of endemic regions and the World Health Organization declared a global health emergency at the end of July. As of November 15th, 2022, the World Health Organization had recorded 79,411 cases and 50 deaths in 110 countries and the Public Health Agency of Canada had confirmed 1445 cases in Canada. Of these cases, the majority have been reported in Ontario (688), Quebec (525), and BC (180).

While mpox outbreaks have occurred in non-endemic regions before, the current outbreak is a marked shift in terms of the number of countries impacted and sustained human-to-human transmission that is not associated with travel to a mpox-endemic country. Even before the current outbreak, it was speculated that waning orthopoxvirus immunity, caused by the cessation of smallpox vaccination after the disease was eradicated decades ago, has created an opportunity for the mpox virus (MPXV) to re-emerge. However, the root causes of the current outbreak remain unknown and are likely multifactorial.

This document provides an overview of mpox and its transmission, and outlines key information for public health inspectors to address transmission risk in personal service establishments (PSEs) and other public settings.

Mpox is a zoonotic infectious disease endemic to parts of central and West Africa. The disease is caused by MPXV, a relative of smallpox that rarely causes severe illness.

There are two primary sub-types of MPXV: the West African clade and the Congo Basin (Central African) clade. Human infections with the West African clade are typically associated with less severe disease, lower mortality, and less frequent human-to-human transmission compared with the Congo Basin clade. Preliminary data indicate that the mpox virus found in the current outbreak belongs to the West African Clade. Illness with this clade is usually self-limiting in the absence of specific therapy. Symptoms resolve within two to four weeks; however a recent case study indicates it could take up to six weeks.

What are the symptoms of mpox?

Symptoms of MPXV infection typically fall into two phases. In the first phase, common symptoms include swollen lymph nodes, fatigue, muscle aches and pains, joint stiffness,    fever, headache, back pain, and proctitis (inflammation of the lining of the rectum). In the second phase, the characteristic mpox rash develops within 1-3 days after the onset of the fever, though not everyone infected with the West African clade develops a rash. The rash usually lasts between two to four weeks, progressing from flat and raised lesions, to small blisters, and finally to scabs, which eventually flake off. 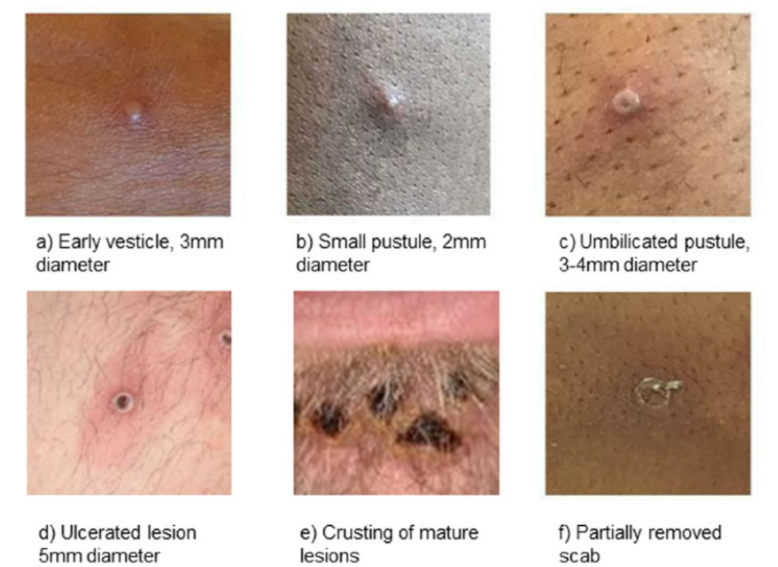 In previous outbreaks, the rash typically started on the face or extremities before progressing to other areas of the body. However, in the current outbreak, genital and peri-anal lesions have been common and have often presented first before spreading to other parts of the body, such as the torso, face, mouth, and extremities, if it spreads at all. This may be related to a pattern of transmission through sexual networks in the current outbreak, rather than a change in the virus itself. There have also been some cases where lesions appeared before first phase symptoms or at different stages of development. Both of these presentations are atypical of how mpox has presented in past outbreaks. Finally, ano-rectal pain and bleeding have also been reported more often in this outbreak.

How is mpox transmitted?

Transmission of MPXV can occur via animal-to-animal, animal-to-human, human-to-human , and most recently human-to animal spread. A person is considered infectious during both the first and second phase of symptoms, until all scabs have fallen off and new skin can be seen underneath. Current evidence suggests that asymptomatic spread of the virus is extremely uncommon.

Transmission of mpox is most likely to occur through direct contact with an individual with mpox lesions, either via bodily fluids or contact between open rash lesions and broken skin or mucosa of the next host. The risk of transmission may be elevated in individuals who suffer from certain skin conditions that disrupt the skin barrier (e.g., psoriasis, eczema, etc.). Transmission can also occur via respiratory droplets, and possibly through short-range aerosols, however both routes of transmission would require close proximity and extended exposure. The role of sexual transmission is not yet well understood, although the virus has been found in the semen of patients. During pregnancy, vertical transmission of MPXV can occur through the placenta from mother to fetus, leading to congenital mpox.

Finally, indirect transmission is also possible through contaminated objects such as bedding, clothing, and towels. In domestic settings, studies have found viable MPXV on both porous (e.g., bedding, linens) and non-porous surfaces in a household (e.g., metal, plastic) 3 and 15 days after the patient had left the household. MPXV appears more likely to remain viable when situated in porous materials. In healthcare settings, changing contaminated linens was the suspected cause of transmission for a healthcare worker in the UK. Replication competent MPXV was also detected in air samples collected while changing contaminated linens in a UK hospital; the same study found widespread surface contamination of patient rooms, work PPE, and PPE doffing areas. Finally, in Brazil, a nurse collecting MPXV lesion samples contracted the disease after a needlestick injury to the thumb.

Once transmission has occurred, symptoms usually present after 7 to 14 days, but can range from 5 to 21 days.

What is the risk of community transmission in personal service establishments?

Currently, PSEs have not been identified as a setting for MPXV transmission and the likelihood of encountering a case is very low. However, PSEs are public settings in which several risk factors for MPXV transmission may be present. These include services that require prolonged face-to-face interactions, skin-to-skin contact, and/or the use of towels, drapes, instruments, etc., that may mediate indirect transmission.

In Spain, a piercing and tattoo shop was the setting of an MPXV outbreak after the operator performed a piercing on an individual with suspected MPXV lesions. However, because client records were not kept, MPXV infection could not be confirmed. Of the 54 clients who visited the shop in the following two weeks, 20 contracted MPXV; 19 of these had a piercing and one had a tattoo. Importantly, 18 out of 20 people developed a rash at the site of the piercing or tattoo. Two weeks after the initial cases are believed to have been infected, MPXV was detected on work surfaces, tables, chairs, and equipment, demonstrating the persistence of this virus in the environment when appropriate sanitary measures are not taken. In Italy, a recently tattooed man presented with lesions within the treated area, but no epidemiological follow up was conducted.

Given this persistence and the potential for spread in a PSE setting, basic knowledge of symptoms may help to inform PSE point-of-service risk assessments. Typically, PSE guidance and legislation advises that clients with open wounds, lesions, or broken skin should not be offered service until the site is healed. This serves both to protect the operator from potential pathogens (even beyond MPXV) and to avoid working on skin that may be unable to heal, further compromising the health of the client.

PSE operators may also be in a unique position to observe and identify the MPXV rash, thus creating an opportunity to limit onward transmission.  If the characteristic MPXV rash is identified on visible skin, or if the client reports any of the early symptoms mentioned above, the operator should alert the client and advise them to seek medical assessment. If the operator is concerned that they have been exposed to an infectious disease, they should (as always) contact local public health or their own healthcare provider.

Are other jurisdictions changing their guidance on PSE practice?

Due to the low incidence of MPXV cases currently, specific measures for PSEs or other public settings are not being recommended at this time. However, if an MPXV case has been identified in connection with a business, operators may require specific information on how to clean and disinfect their premises for MPXV, including furniture and other items the client touched. Infection prevention and control guidance for MPXV decontamination centers on:

While these recommended measures might seem disproportional to the level of individual risk, they are aimed to stop transmission in this early stage of community spread.

Other than personal service establishments, what other places may be at elevated risk for community transmission?

During the current outbreak, both in Canada and abroad, MPXV transmission has occurred mostly (but not exclusively) among men who have sex with men. Sex-on-premises venues specific to this community have been important sites of transmission and enhanced frequency of cleaning is recommended.

At present, there is very little cause for concern regarding transmission between members of the public via casual or non-sexual contact. However, settings with surfaces or equipment that come into direct contact with skin or settings where linens, towels, or other items are re-processed (e.g., gyms, hotels, hostels, daycares, correctional facilities) could be potential sites of transmission if MPXV begins to spread more widely. Finally, the World Health Organization has also identified mass gatherings as potentially conducive environments for the transmission of mpox virus if they involve close, prolonged and frequent interactions among infected individuals that could expose them to contact with lesions, body fluids, respiratory droplets, or contaminated materials.

The current MPXV outbreak has raised concern due to its atypical presentation and its unprecedented spread through several generations in non-endemic countries. Current spread through sexual interactions emphasizes the importance of very close (skin-to-skin and face-to-face) contact in transmitting the virus. Although PSEs are not currently a setting for transmission, PSE operators should be vigilant as they may have direct contact with or be able to observe broken skin amongst their clients and should take appropriate steps if MPXV is suspected.

Leah Rosenkrantz and Angela Eykelbosh are an EH and KT Scientist at NCCEH.