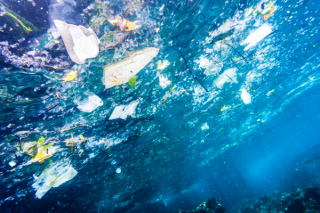 Microplastics are plastic particles that range in size from the width of a single strand of hair up to 5 mm. They are made from petrochemical sources and may be deliberately manufactured or unintentionally created. Manufactured microplastics may be used in the production of personal care and cleaning products. Unintentionally-created microplastics include tiny fibres released from fabrics such as clothing, and particles from the breakdown of larger items, such as plastic bags and bottles, following exposure to sun, wind, rain, and waves.

Why are microplastics a public health issue?

Microplastics are contaminants of emerging concern because they are widespread in fresh water, marine, and terrestrial environments in Canada and throughout the world. Microplastics can be washed down the drain, through waste water treatment plants, and into our rivers, lakes, and oceans where they enter aquatic food chains.  Other microplastics enter soils, for example through landfill leachate or improper disposal, e.g., plastic sheeting used in greenhouses. Some particles may become airborne.

People can be exposed to microplastics through different routes. Microplastics have been detected in   fish and shellfish, that people eat and recently, researchers found particles in multiple brands of bottled water. Accidentally swallowing personal care products such as toothpastes is another source of exposure. We can also be exposed by using microbead-containing care products on our skin.

There are potential human health risks from exposure. Microplastics contain a range of toxins with known human health effects, including benzene, xylene, ethylene, propylene and their derivatives. Other chemicals are added during plastic production, such as bisphenol A and S, and phthalates.  When plastics break down, they release toxic compounds such as polyaromatic hydrocarbons and polybrominated diphenyl ethers.  Many of these chemicals are already regulated because they are known endocrine disruptors, meaning they can interfere with growth, development, metabolism, and reproduction and some are carcinogens. Microplastics also attract bacteria, viruses, or other disease causing organisms that may grow on the plastic’s surface.

What don’t we know about microplastics and human health?

There are still large gaps in our knowledge concerning how microplastics might affect human health.

This is probably the largest area of uncertainty.There are few studies focused on the different routes through which people could be exposed to microplastics.

What is being done?

New microplastic-specific measures have been implemented in a number of countries:

Besides these policy and regulation measures, research is also being carried out to improve technology. For example, research into the development of cost-effective waste water treatments to filter out microplastic particles and prevent their discharge into surface waters is ongoing; research on  harvesting, recycling, and reusing microplastics is underway; as well as research on how to monitor and reduce waste production in the microbead lifecycle. As consumers, we can also reduce our use of plastic products or products containing microbeads by choosing not to use them when possible.