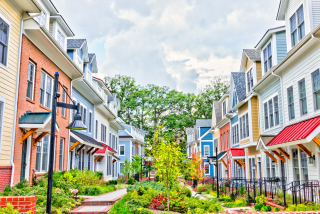 Social isolation is an increasingly important issue in Canada which has been associated with negative health outcomes such as depression, anxiety, and cognitive decline among those with dementia.  Cardiovascular and cancer patients also experience worse outcomes. Public health does not give much attention to housing form but how we design the homes in our community gives health practitioners and municipalities the opportunities to bring social isolation, a growing health concern, into the conversation about healthy built environments.

In order to take a deeper look at the potential health benefits of communal living, the BCCDC and NCCEH recently published a commentary in the Canadian Journal of Public Health entitled Public Health should promote co-operative housing and co-housing.

What are Co-housing and Cooperatives (Co-ops)?

The main component of these complexes is that residents plan and manage their communities collaboratively to build social support networks. In northern Europe, many new developments are built with co-housing principles in mind. Residents of both co-housing and co-operative housing may be nuclear families, single persons, elderly, friends, and/or multigenerational families.

Co-housing is characterized by six features:

Co-ops are somewhat similar but are usually run by a board or non-profit organization. Co-op communities are made up of people who are socially, ethnically, and economically diverse.

What are the health benefits?

Though co-housing residents often have their own personal dwellings, they generally share communal tasks (such as childminding), communal spaces (such as gardens or work spaces), and meals which promote feelings of belonging, self-esteem, and self-actualization. Additionally, people of all ages receive more social support and health benefits in co-housing compared to neighbouring residents. The effect on health is even more pronounced for older people. Older people tend to stay in their own homes longer than people in surrounding neighbourhoods who are not in a co-housing environment.

Much like co-housing, co-op residents undertake maintenance of common areas, caregiving including delivery of food or and/or gardening or maintenance. Co-ops are sometimes built for socially excluded individuals, such as the low income or those with mental or physical disabilities. Residents who move into co-ops often report significant improvements in feelings of safety, well-being, and community connectedness.

In Canada, indigenous populations have been identified as being at high risk for social isolation.Since the colonization of North America, housing, particularly on reserve, has resembled the individualistic housing forms familiar to colonizers and these may or may not suit First Nations’ needs. Similar to co-housing developments, longhouse designs vary but typically consist of two rows of houses facing each other and a common area in between which provides space for multiple families and multiple generations to live closely but have their own space. Such living arrangements may help promote well-being through intergenerational living and cultural sharing as well as providing working spaces and tools for entrepreneurs or craftspeople.

What can public health do?

There are several ways public health and municipalities can incentivize communal living situations:

Co-housing and co-ops are not a panacea for all the issues around social isolation, nor do they work for all people, but these ideas do offer an interesting way for public health practitioners and municipalities to promote health through modifications to the built environment.