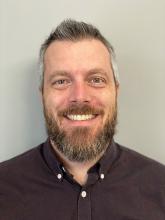 National President of the Canadian Institute of Public Health Inspectors

Kevin assumed the position of National President of the Canadian Institute of Public Health Inspectors on January 1, 2020. Kevin has been a valuable, dedicated and outspoken member of the NEC since May 2017. In spring 2007, he obtained his BASc in Environmental Health and Science at the First Nations University of Canada/University of Regina and obtained his CPHI(C) in the fall that same year. Since then, he has worked with the Saskatchewan Health Authority as a Public Health Officer, a Primary Care Manager and is currently a Clinical Integration Manager covering rural Saskatchewan.

Kevin became interested in CIPHI after he attended the Annual Education Conference in Regina in 2006 and the provincial conference in 2007, both organized by the Saskatchewan Branch. Inspired by the dedicated volunteers working hard to put on two great events, Kevin got involved, and was a part of the CIPHI Saskatchewan Branch executive from 2011-2019 and served as branch president from 2017 to 2019.

Kevin currently lives in Saskatoon, SK with his wife Amanda and son Aiden. When he’s not working, he coaches both hockey and baseball, plays recreational hockey and golf, travels, and spends time at the family cabin.